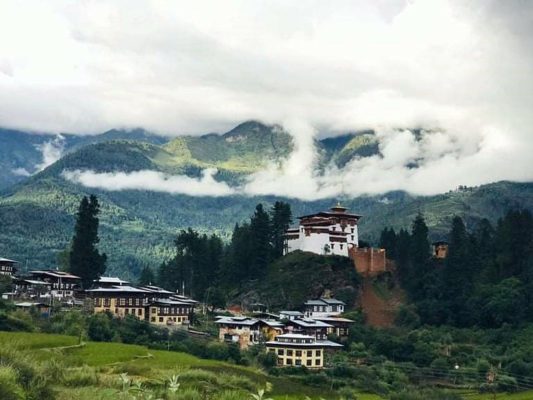 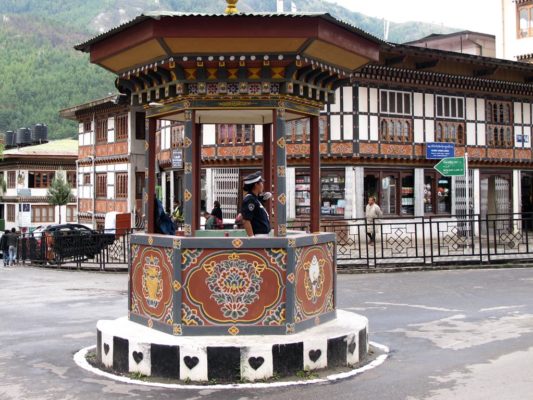 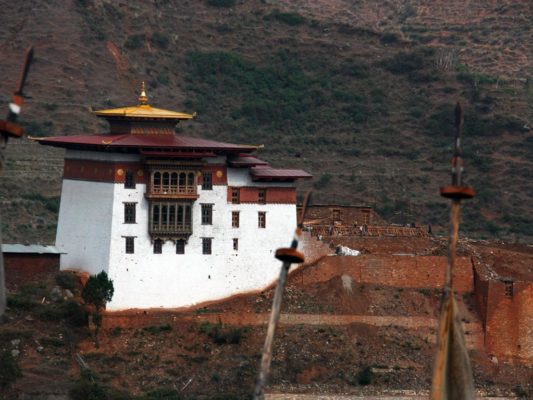 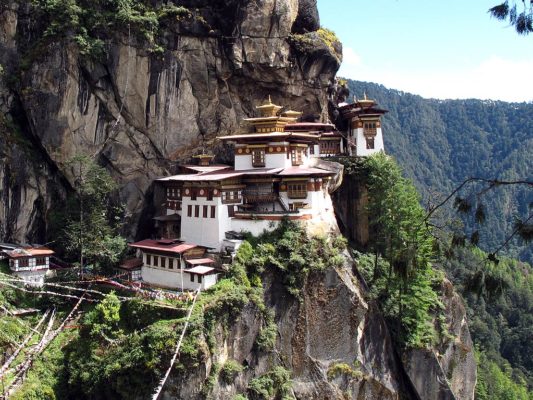 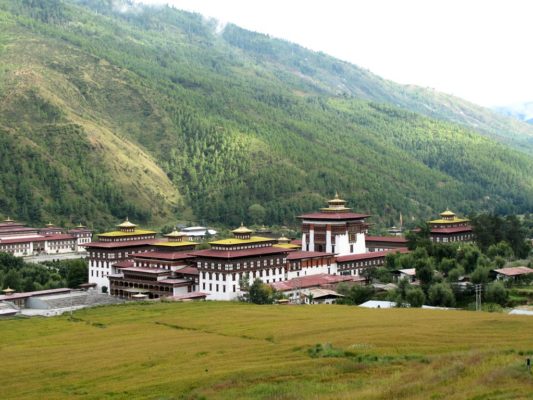 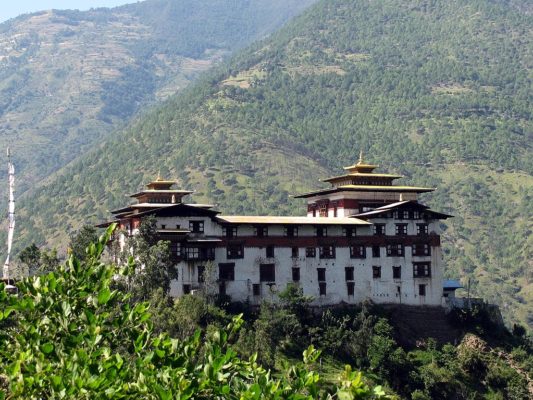 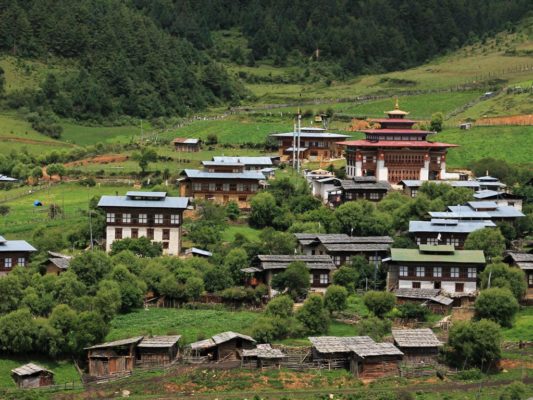 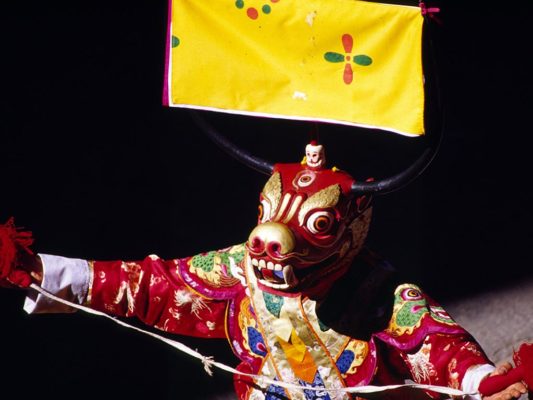 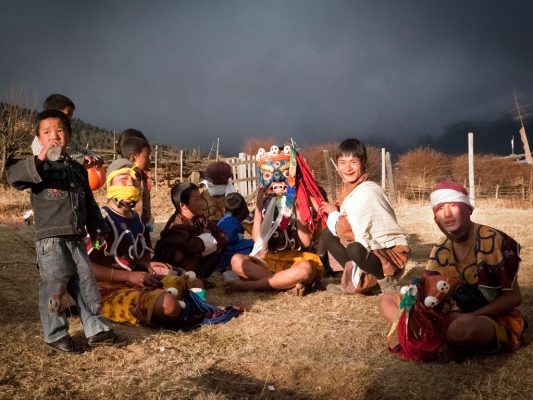 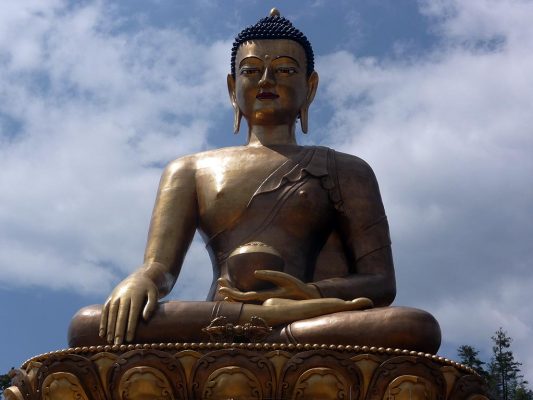 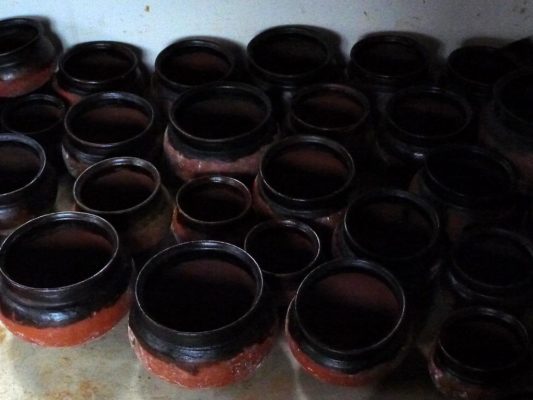 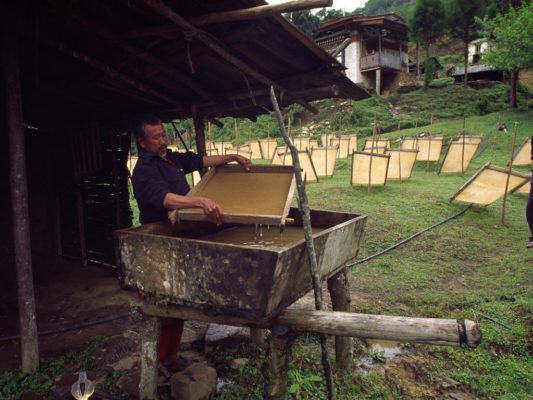 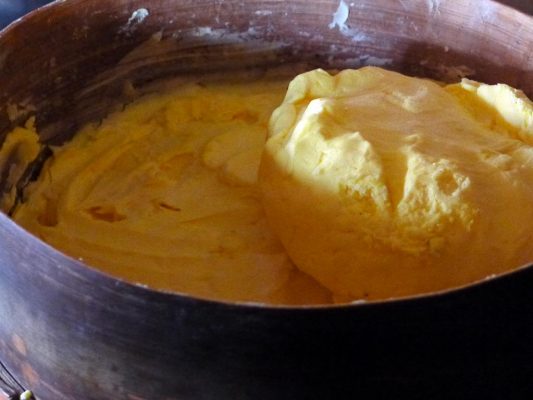 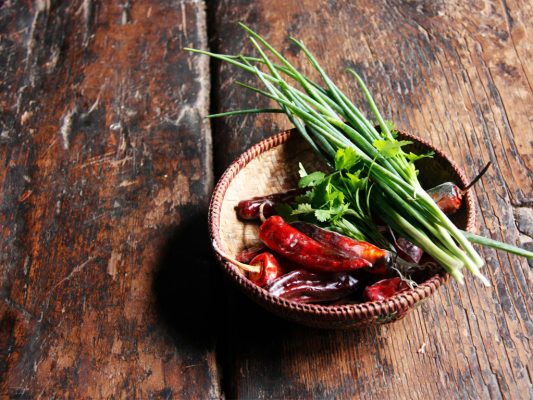 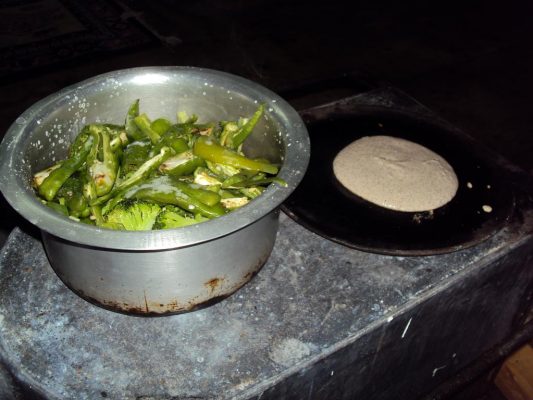 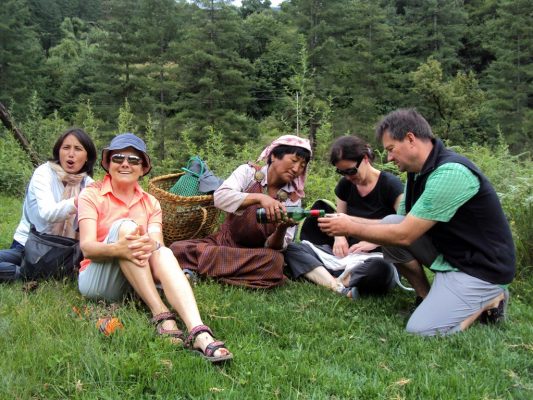 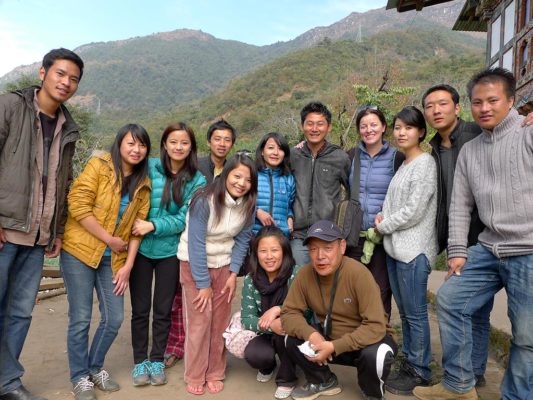 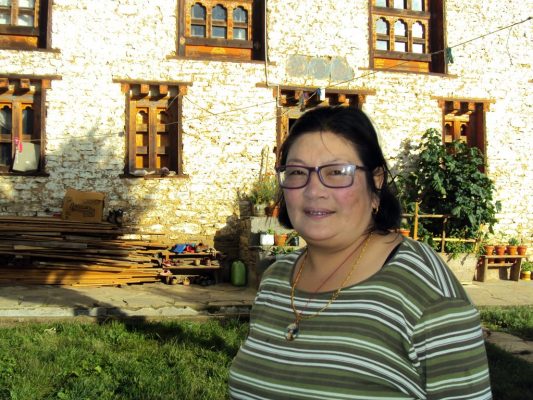 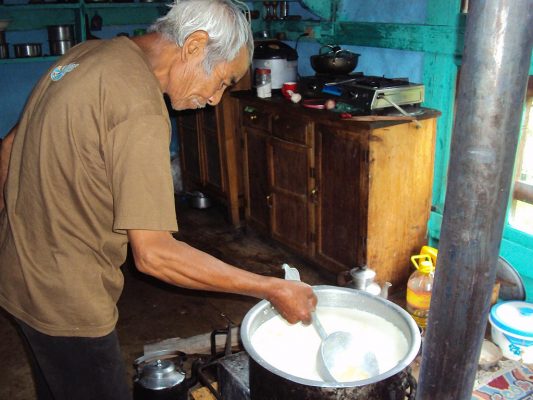 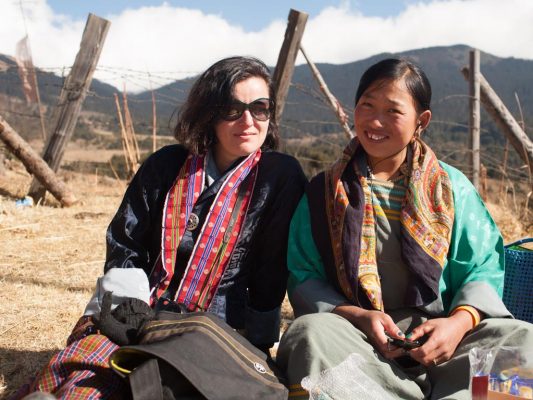 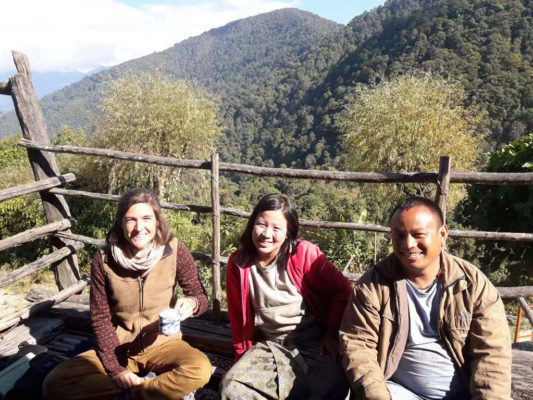 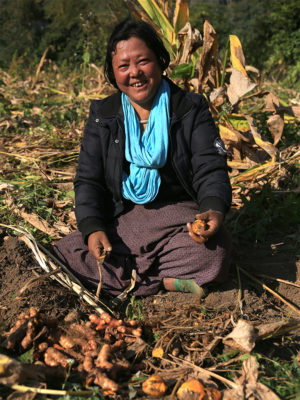 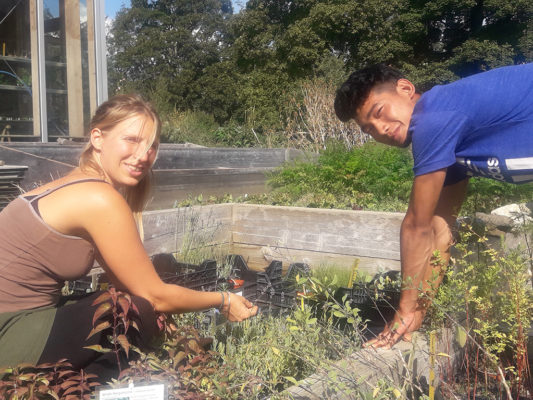 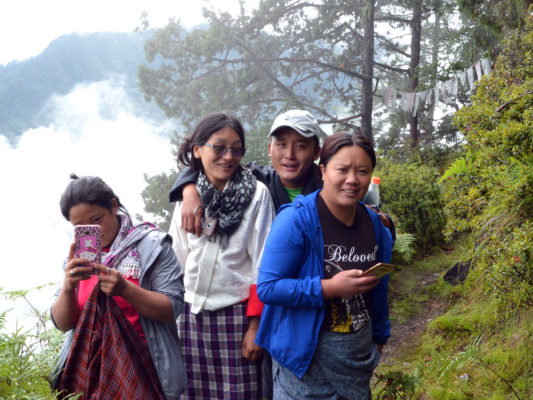 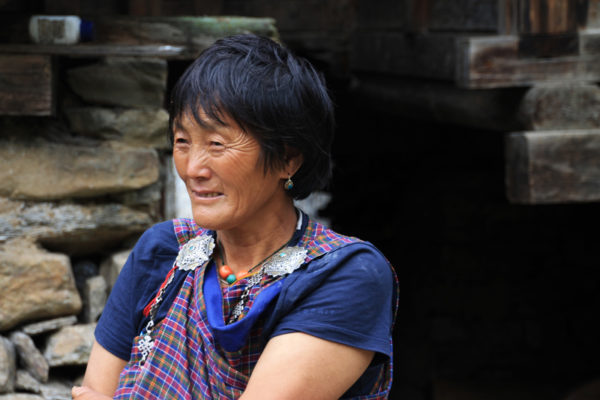 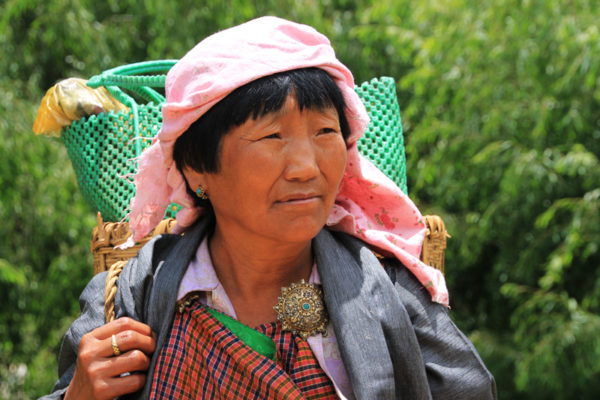 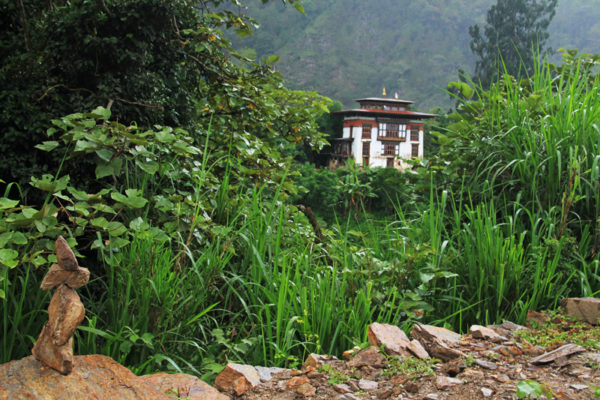 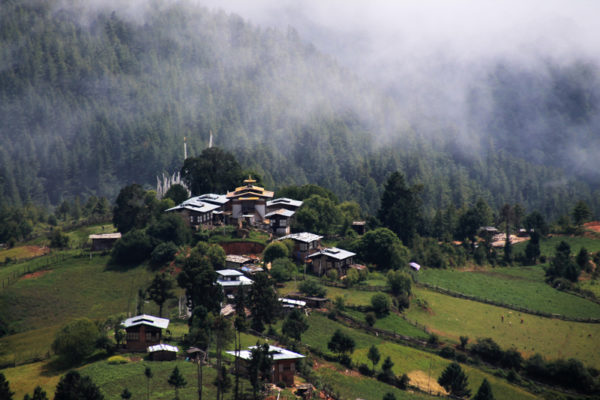 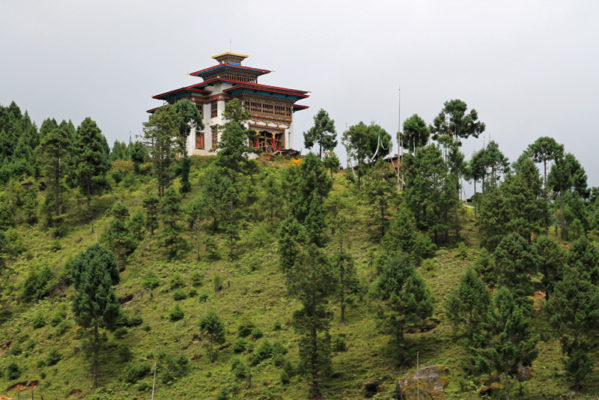 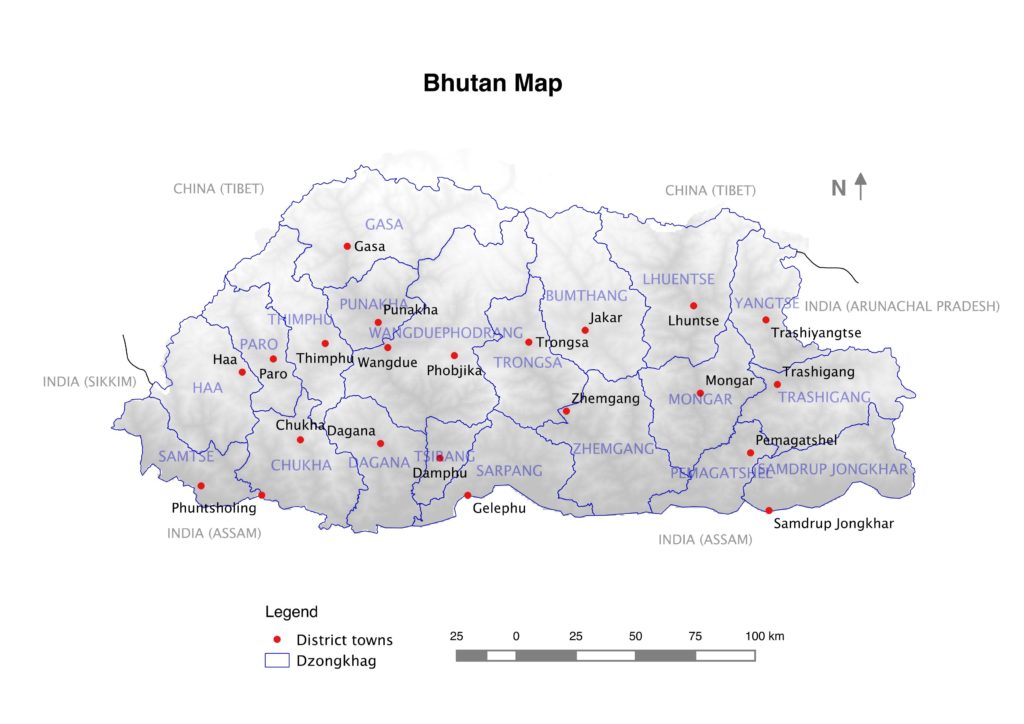 Bhutan – in the National language Dzongkha referred to as “Drukyul”, the “Land of Thunder Dragon” or Druk Gyalkhab, “Thunder Dragon country”– is situated in the eastern Himalayas. Bhutan is landlocked between the two densely-populated giants India and China (Tibetan Autonomous Region) with a land area of 38,394 square kilometers, of which approximately 71% are forested. Article 5 of the Constitution of the Kingdom of Bhutan states that a minimum of 60% of Bhutan’s total land area has to be maintained under forest cover for all time.As of 2019, the projected population amounts to 734,374 .

The lowest areas of Bhutan lie at roughly 100 meters above sea level in the South and the highest point is Gangkhar Punsum at 7578 meters in the North. The country is characterized by steep and rugged mountain terrains covering various ecological and climatic zones, making infrastructural development very difficult.

After centuries of theocracy, the year 1907 marked the beginning of the monarchy with the Wangchuck dynasty consolidating as the Royal lineage. In March 2008, the first democratic elections were held and Bhutan transformed into a democratic constitutional monarchy. Currently, the head of state is the fifth king, Jigme Khesar Namgyal Wangchuck who took over the throne from his father Jigme Singye Wangchuck on December 9th 2006, and was publicly enthroned on November 1st 2008

The population is roughly divided into three large groups, the Ngalong in the West, Lothsampa in the South and Sharchop in the East. There are four linguistic groups: the Central Bodish group which includes the National language Dzongkha, the East Bodish group (e.g. Bumtangkha, Kengkha and Kurtöp), other Bodish languages (e.g. Tshangla) and Indo-European languages (Nepali, Hindi, English). The existence of a multitude of languages has led most Bhutanese to be multilingual, speaking at least three languages.

Bhutan’s biodiversity is rich and the country can be divided into three eco-floristic zones: the subtropical lowlands, the temperate midlands, and the alpine highlands. These roughly correspond to the common geopolitical areas of southern, middle and northern Bhutan although near-alpine mountain tops can also be found in southern Bhutan and subtropical forest in the north.

The Southern region comprises the sub-Himalayan foothills. It is covered with tropical forest that forms a narrow belt with the Indo-Bhutanese border. This region has a sub-tropical monsoon climate and annual rainfall is excessive. it is hot and humid during summer with an average temperature of 30°C during daytime but pleasant during winter with an average of 20-25°C during daytime.

The Central region lies within the inner Himalayas and consists of higher mountains. The climate of this region is moderate at lower elevations and rather cold in higher elevations, especially during the night. In summer, temperatures can rise to 23°C during daytime even in the higher altitudes.

The Northern region lies within the Great Himalayas, with high snow mountain peaks along the Chinese border. Bhutan’s high altitude trekking routes are found in this area.

Bhutan is the last independent country in the world with Mahayana Buddhism as its state religion. It is commonly presumed that Buddhist teachings reached Bhutan in the 7th century AD, when the first temples were established. Kyiuchu-lhakhang in Paro and Jampe-lhakhang in Bumthang were founded in the first half of the 7th century by the Tibetan king Songtsen Gampo.

However, the most important phase was when Padmasambhava or, as he is referred to in Bhutan, Guru Rinpoche, came to Bhutan in the mid-8th century and established a sound base for the unique development of the country’s cultural and religious tradition. The legend has it that he did this by subjugating the local deities and spirits of the then prevalent Bön religion and integrated them into Buddhism as protection deities, establishing the tantric form of Bhutanese Buddhism.

After the 11th century AD, different Buddhist schools started to spread into Bhutan. From the 13th century onwards, many Buddhist teachers (lamas) travelled to Bhutan to introduce the teachings of their respective schools. Many of them founded only a few temples, which were integrated by other schools. Today, the Drukpa sect of the Kagyupa School, as codified by Zhabdrung Ngawang Namgyel in Bhutan, represents the state religion. However, in the eastern part of the country the Nyingmapa tradition is very widespread.

Bhutan has become well-known for its ideology of conservation and preservation of its unique environment, culture and traditions, following a “middle path” that resonates with Buddha’s teachings. The National Environment Strategy for Bhutan articulates that the notion that Gross National Happiness (GNH) is more important than Gross Domestic Product is inherent to the Bhutanese Buddhist value system. This is explained in opposition to the western notion and concept of development, which usually refers to the satisfaction of the population’s material wealth:

According to both Buddhist and pre-Buddhist philosophies, the mountains, rivers, streams, rocks and soils of Bhutan are believed to be the domain of spirits. Pollution and disturbance are believed to be the causes of death and disease for those spirits. The Buddhist respect for all living things has led to the development and adoption of ecologically friendly strategies – a solid base upon which a national environmental strategy can be built. This, coupled with the Buddhist tenet that the acts of this life will be rewarded or punished in the next, provides a powerful motivational principle for sustaining Bhutan’s natural resource base.

This sentiment is also reflected in the National development strategy Gross National Happiness (GNH). GNH is the unique Bhutanese development ideology which places as much emphasis upon happiness as it does upon the economic well-being of a society. It is based on four pillars i) good governance ii) sustainable socio-economic development iii) preservation and promotion of culture and iv) environmental conservation. It is further divided into nine domains with 33 specific indicators, the nine domains being i) psychological well-being ii) health iii) time use iv) education v) cultural diversity and resilience vi) good governance vii) community vitality viii) ecological diversity and resilience ix) living standard.

GNH was first formulated by the fourth King of Bhutan, but it has its roots in the 1729 legal code of the unification period of Bhutan by Zhabdrung Rinpoche, in which it is declared that “if the government cannot create happiness (dekid) for its people, there is no purpose for the government to exist”. The government largely measures GNH quantitatively, through national surveys every few years (reports). However, there continues to be much debate whether happiness is something that can be measured quantitatively.